This year planting came late. Spring came late, very late. I’m not so sure we even got a spring, we just held on to winter until school let out then it was summer. Consequently I was a little worried that the corn wouldn’t make it to “knee high by the 4th of July” 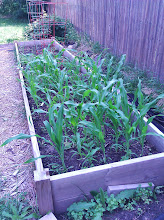 It did. Actually it’s the 1st of July and it’s already Knee High. I’m not really sure where that saying came from, but it is a good indicator of a good harvest for corn. Not to mention it’s just fun to say.

Last year, we had an early spring and early planting and I’m pretty sure the corn was Waist High by the 4th of July. That’s not as much fun to say. Last we also had a serious beetle problem and lost most of the crop. This year, I’m on the look out for the beetles. First sign that even one is in my yard and I’m pulling out the chemicals and traps and they will be eradicated. I’m not losing another whole crop of corn to the little buggers.

This year we are going to feast on corn grown as locally as you can get. August will be awash in corn on the cob grilled to perfection.