In my monthly series here, I’ve been delighted to interview some up and coming authors. Next up is Kalen Cap. Kalen not only writes delightfully complex novels, but is active in other areas. It makes it all the more special that he spared some time to sit down and answer a few of my questions.

Without further ado, I’d like to welcome Kalen Cap.

Every book comes with its own challenges. What new challenge did you encounter writing your latest book?
The bridging of events from ancient times into modern conversations is tricky without making a lengthy information dump. Also, doing that without disengaging from character POV was a different challenge in this novel.
So we learn from each encounter. Wouldn’t it be great if we could go back and just tell ourselves how to get through that difficult book? What advice would you give to your younger self?
Move on from things that aren’t working more quickly. Put in some effort, but after that, choose to move on to something where you may be able to make a difference rather than repeatedly banging your head against a wall.
Right, less head banging, more getting on with it. That takes motivation. What is your favorite motivational phrase?
“You can do it.” I like it because it is silly and universally applied. Don’t have to think about it, simply act.
That’s so true. You really can do it, but sometimes it takes a bit more than that. What advice would you give to aspiring writers?
Write something and share it for critiques and feedback from other writers. Learn from others’ experience and be less afraid of making mistakes. I find I learn a great deal from mistakes, but much less when I do okay with what is my comfort zone. Often, those mistakes are the vehicles to improve the craft of writing.
I see that you self-published your first novel. Can you tell us about your experience with formatting the book? 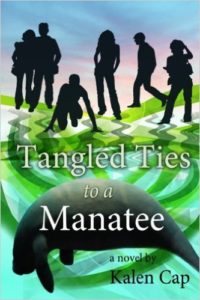 For the ebook, I hired a service. Though not inept, I’m not technically sophisticated and had seen numerous examples of problems in ebooks. So, I wanted to avoid those. But, for the print book, at the time, I managed to format that myself.

Kalen Cap is a writer living in Columbus, Ohio. His upcoming young adult novel “The Ancient Tripod of Peace” is currently scheduled to be published in 2017. It is the first of the “Teen Thief-Catchers” series set along the southern coast of Lake Erie in Ohio.
Active in environmental and animal protection causes, he often brings such concerns into his fiction writing. “Tangled Ties to a Manatee” was his first novel published in 2012 and is available in paperback and kindle ebook formats on Amazon.com.