It’s that time once again. Time for me to introduce you to another fine Indie Author. This month I present to you Kristen Kooistra. Kirsten is the Author of “Heart of the Winterland”.

How do you go about creating the language in your book? How do you translate it?

I’m horrible with fantasy languages because when I read them, I accept that they’re “real”, but when it comes to mine I can’t forget that they’re fake. So what I ended up doing for my first magical language was taking a more obscure real language and using that as the foundation. That way the words have a “sound” to them that’s consistent, and then I just tweaked a bit.

I’ve only had one person pick out that I did that, and it was my mother who knows I had an obsession when I was younger with learning that language.

I don’t worry about translation, because none of it ever gets translated. It’s a language used purely for spellcasting and readers will see the results of the spell. I was mostly trying to have something consistent in appearance and sound. Direct translation would look silly since I kept things short as possible and it’d probably look like, “Grass go there.” 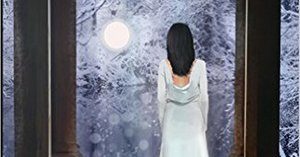 Which of your characters do you think you’d be close friends with, if you lived in their world?

Probably Amee. She was one of my favorite characters to write and in the process of wanting to make a sympathetic antagonist, I fell in like with her. I think she’d be the no-nonsense, tell you like it is, friend. The friend who’d be in jail with you, not bailing you out. Despite her dark side, I think we’d be good friends.

When did you first call yourself a writer?

Around two years ago. I think in my head I’ve always been a writer, but that’s just because I’ve always created stories in my mind and wished to write them down. Other than some journaling, I didn’t do much writing though and I couldn’t say “I’m a writer” if I didn’t write. I might’ve said that I enjoyed writing, but it wasn’t until I became serious about it and actually wrote things(summer of 2014) that I started calling myself a writer out-loud and feeling it was true.

Where is your favorite place to write?

On my bed. Since I write on my computer it’s pretty much the only place I write.

What’s your next writing project, and how’s it going?

I’m currently working on Heart of the Sorceress which will take place after Winterland but I’m hoping to have it stand alone for the most part. I meant for Winterland to end in a way that didn’t require reading further if someone doesn’t want to. And in the same way, I intend for someone to be able to just read Sorceress without needing to have read the previous book.

But there are things that connect to each other. Characters that cross over, so I’d definitely recommend reading them in order as you’ll look at Sorceress in a whole new way if you know the history.

I’m about a third of the way through my first draft, and I’m hoping if I can keep up this pace to have the first draft completed this fall.

Kristen Kooistra fell in love with reading at a young age and never resurfaced. She loved solving mysteries, riding across the prairie, and sailing on the open sea. But her favorite books were those that held the fantastical. So when the time came for her to seriously approach publishing a book, it had to be fantasy!

Living in Michigan(her own winterland) with her husband, three kids, and two cats, she has lots of free time . . . Okay, so more like she squeezes in writing time late at night when only the cats are awake to pester her.

“Heart of the Winterland” is Kristen’s first novel, and though it started as a whim, it grew into so much more and has inspired a sequel(in progress), “Heart of the Sorceress”.

Tucked into a quiet countryside, Kristen spends most of her time being Mommy. She loves spending time with her family and hopes that her writing will entertain and inspire them as well.

Besides writing, Kristen enjoys reading(of course!), chatting with her writer’s group, sewing, swimming, gardening, and cooking(please no baking!). She’s also developed a fondness for water gun fights with her three year old. Actually, she’s found that most everything become a lot more fun with little kids.