It’s time once again to welcome another Author to my page. Melion Traverse is a writer and a grad student (how do you find the time?).

Do you read outside your genre?

Actually, most of my reading is done outside my genre. Is that a positive or a negative? I don’t really know. The majority of what I read is non-fiction, although I do tend towards reading speculative fiction when I read fiction. And I realize that probably sounded pretentious. I apologize. I’m not actually pretentious, I just come across that way when I write about myself. If you’d prefer, I could write these answers in the third person so you’d feel justified in slapping the pretension out of me.

Not so long ago, I waded into an internet argument with somebody (I know, I know) who claimed people who write speculative fiction don’t have to do research. 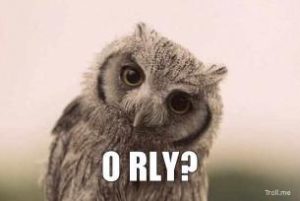 Do we have a picture of O RLY Owl to go here? Because that about summed up my reaction. Granted, I don’t research as extensively as some other genres may require, but I still research.
Just as an example of one dimension of my research, I have a protagonist who has read a fair amount of military history and biography, so I decided I should read the books that she has in her room so as to get a better understanding of her character. I read Marcus Aurelius’ Meditations, Sun Tzu’s Art of War, Miyamoto Musashi’s Book of Five Rings, Machiavelli’s Art of War, books like that.
As far as researching how things work within the world I’m building, I learn better by doing than by reading, so my references are more hands-on experiences than books. I took some basic falconry lessons from a falconer so that I could get a better understanding of how falconry works. Believe me, I’m not any sort of expert after a couple of lessons, but it did wonders at clearing up some misconceptions I had about falconry. In a similar vein, I joined a historical fencing academy so I could better understand the practical aspects of swordplay. During that time, I became acquainted with Alfred Hutton’s book Cold Steel and also with Henry C. Wayne’s manual The Sword Exercise: Arranged for Military Instruction. Both proved invaluable for helping shape my understanding of the sabre and give me theory with which to practice and to implement into my world.

How often do you write, and do you have a special time during the day to write?

I try to write every day, and I most enjoy writing in the middle of the night.

I listen to music because it helps direct my focus to my writing, but I don’t have a particular soundtrack. My listening preferences for writing tend towards rock and metal, but I do include some quiet classical and some traditional folk music depending upon the scene I’m writing.

If you won ten million dollars tonight, what would you do next?

Pass out from the shock and probably make a terrible mess of the carpet. Once I came to and threw a rug over the new stain on the floor, I’d replace my seventeen-year-old car, pay off my student debt and contact a professional financial adviser.

Melion Traverse writes things. When not writing things, Melion still lives with one spouse, two dogs and an acceptable amount of chaos. She is occasionally found playing with swords, studying martial arts, and lifting weights. Other times, she hides with a book and an energy drink as she avoids the tumbleweeds of dog hair overwhelming her house. Melion’s short stories have appeared in, or are forthcoming in, *Deep Magic, Fantasy Scroll Magazine, Cosmic Roots and Eldritch Shores, Cast of Wonders, Scarlet Leaf Review, Havok*, and *T. Gene Davis’s Speculative Blog*. Check out her haphazard blog.