There are so many jokes about authors and cats. About people who have cats in general. It almost feels like a cliche to point out that I, too, have cats. And yet, when I think about it, only about half, maybe less, of my friends and acquaintances have cats, but well over 75% of my writer friends have or want cats. There must be something to it. 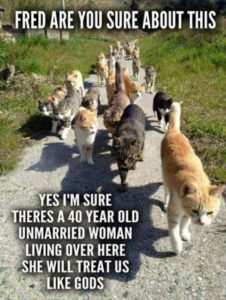 The stereotype of the “Crazy Cat Lady” – you know that old bat who lives alone except for the hundreds of cats who swarm her property – is not that far different from the common image of the recluse writer whose only companions are the people in her head. I can’t tell you the number of conversations about writing that bring up the metaphor of cat herding to describe characters or projects that just won’t go in the direction you want them to go. We also talk about “what stories have you?” much like people joke about “how many cats own you?”

There’s truth to this.

I live with three cats, and have kept a fairly consistent schedule about feeding, bed time, wake up time, etc for years. For years I tell you. Yet, it’s still nearly impossible for me to get all three cats to come to their dishes at feeding time. In the same way, I have tried (and tried and tried and tried and tried…) to plot out my stories only to have my characters turn up their noses and walk away. I have author friends who can’t get their characters to do anything without a detailed itinerary, I mean outline. Other author friends can only write when they are alone with no distractions and others have to go to the coffee shop to get their characters to show up.

It’s not just characters either. The stories themselves can be just as finicky. This one is a one shot, no maybe it’s a trilogy, except it really wants to add a third, fourth, tenth… It started out as a nice sweet coming of age slice of life… until the world fell apart right in the middle of the MC’s Bar Mitzvah. Or that horror story that just couldn’t lay off the puns. The Hard Sci-Fi bit where they actually discover the source of magic by hatching a dragon’s egg.

Stories go all over the place. New stories pop up before you are finished with the old one. I used to keep an idea file, just in case I ever had a day without a story. It got full, and I’ve never had to use it. There isn’t a day that goes by that I don’t have a story to tell. There are characters in every nook and cranny of my brain just waiting their turn to tell their story. Some of them aren’t so good at waiting. They push their way to the front and I have to do something about them, just like the cat who is sitting in front of the computer screen as I write this.

A recent count of my open projects reveals that I have seventeen (17) projects that are in some stage between started and completed. I did not count all the ideas that are just floating around, just the ones that have actual words in an actual folder on my computer. Seventeen open projects. I’m feeling like a crazy cat lady. Most of those are simmering on the back burner waiting their turn in the spot light. The spotlight is crowded with five (5) projects getting time from me almost daily.

The community where I live limits the legal number of cats per household to three. A nice sane number unless you want them all to do the same thing at the same time. I’ve heard similar advice about writing. Keep only three open projects at a time. Maybe, if there were the force of law behind that advice, I’d be able to follow it. For now, I’m off to work on the high fantasy, or maybe it’s the space opera, or there’s that interesting contemporary…