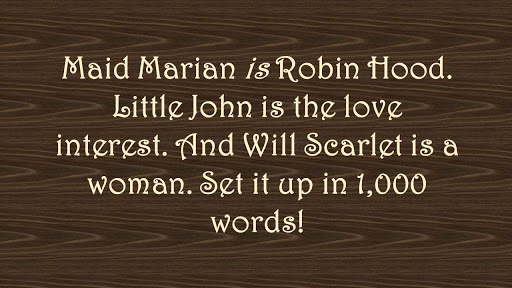 Because my dear friend Milli Gilbert  decided I needed a challenge just because I wasn’t writing on Sunday night. She said:

Here is the opening to a different telling of Robin Hood.

Marian tugged at the sleeves of her dress. They were too tight. They were always too tight. She could barely move in them, and could hardly be expected to draw a bow or punch a guy.
“Miss, you need to stop fidgeting,” Scarlet whispered, “It isn’t lady-like”
“I don’t want to be lady-like.” Marian whispered back.
“You also don’t want to annoy the sheriff.”
Marian took as deep a breath as her bodice allowed and cropped her hands. Sarah was right. She couldn’t afford to annoy the sheriff. Not today when he was bound to be irritated anyway. Another tax shipment had failed to arrive at the palace. Actually it failed to make it out of Sherwood, but she wasn’t supposed to know about any of that.
“Just find him!” The sheriff’s voice rang through the hall.
Marian lowered her gaze to keep from laughing directly at the Sheriff. Honestly, she wondered how much longer she could stay in the Sheriff’s good graces. He was growing increasingly frustrated with the band of merry men who were causing all kinds of problems around Sherwoood and especially Nottingham.
“Ah, Maid Marian,” He smiled so big and so fake it made her skin crawl, “I’m so glad you came.”
She remembered all the etiquette lessons she’d been forced through and gave him a polite smile in return. “Of course, Sheriff. I’m just curious what you require of me today?”
He grabbed her hands and pulled her in to kiss her cheeks. “My lovely lady, I need your charm.”
Marian controlled the gag.
“Prince John,” the Sheriff continued pulling her around to walk with him, “will be here shortly and I need you to keep him happy.”
“I’m not some common whore.” Marian kept her tone light, not quite making it a joke.
The Sheriff faltered. “No, of course not, that’s…”
She loved to make him blush like that. It was too easy with how flustered he was over the whole “Robin Hood thing.”
“I merely meant for you to chat with him over dinner, and perhaps a bit after.”
Marian knew that. “Because I’m of royal blood, you mean. You think I have some greater power for entertaining the prince?”
“I think you are a beautiful and witty lady.”
“Isn’t he coming to speak to you?” I’m hardly worthy of a royal visit.
The Sheriff’s grip tightened on her arm for just a moment. He knew better than to leave a bruise or let his frustration show, too much. As Maid Marian, she did have that title and claim to the royal family, thin though it was. If she were to complain to Prince John that the Sheriff had mistreated her, the Prince would more than likely remove the Sheriff from his post. Especially considering the lack of taxes from Nottingham and the other villages in Sherwood.
“Of course he has come to see me.” The Sheriff’s jaw clenched. “I am not ready for him. I need a bit of a distraction and you are skilled enough to keep his mind somewhere else while I deal with certain affairs.”
Well, that was surprisingly honest of him.
“Very well. I’ll stay for dinner and an hour more.”
“Just an hour?”
“I’ll not be staying the night, and it gets dangerous for a lady to be out too late.” She hid her smile. “There are rumors of bandits in the streets.”
She looked away from him to keep from laughing at all the faces of anger and frustration he was making. His post, in most towns, was more or less ceremonial. Of course most towns didn’t have a band of thieves expertly targeting the coaches filled with the scandalously hight taxes Prince John demanded. She wished she could do something for all the people of England, but Sherwood would have to do.
“I’ll see you at dinner then.” The Sheriff released her and signaled for his men to follow him.

Dinner was as boring as the Sheriff promised. At least Scarlet was able to get away to let Little John know that she was stuck in the Sheriff’s house. By the time she could safely say it was time for her to leave without the Sheiff calling foul, she discovered many useful things. Such as how long the Prince intended to stay in their little village, how many guards he’d brought with him and exactly why he was still single. The prince couldn’t carry his end of a conversation in a bucket.
She couldn’t wait to get out of there, and out of this damnable dress. How did the ladies in London do it? She let Prince John escort her to her carriage and wish her luck and safety on her way home. She barely waited for the carriage to start moving before pulling the curtains and pulling the laces of her gown. With the confining garment out of the way, she searched below the seat for her preferred clothes.
“Looking for these?” Little John swung down from the carriage roof and passed her clothes through the window.
“Cad.” She snatched the breaches, simple peasant shirt and vest from him. She was mostly dressed by the time he’d managed to get into the carriage proper.
“How else am I supposed to make an entrance?” He kissed her before taking his seat.
“I should scream.”
“Why would you do that?”
“A peasant being so forward with a lady? And you saw me in my underthings.” She finished belting the vest in place. “It’s a total scandal.”
John laughed. “And you being the ‘Robin Hood’ isn’t?” He lounged on his side of the carriage. Damn but she loved that look on him.
“That’s why I don’t scream.”
“And you know I’ve seen more.”
“Hush your dirty mouth or you’ll taste no more of it.”
He laughed heartily. They both knew she wouldn’t keep that threat. Though she might cut him off for a night.
“It’s almost our stop.” She nodded out the window to the darkening forest. John waved for her to go first. She opened the door and scrambled up the side of the carriage to the roof.
“All right there miss?” her driver asked.
“Alls well. Remember to drive straight to the manor and tell everyone I’m home and took early to my bed.”
“Yes Miss.”
She loved this part, balancing on the top of her carriage looking for a low branch. A quick jump and she was in the tree and running for their camp. John caught up to her before long. “Gather the ‘Merry Men.’” She called at the edge of the camp.
They were a rag tag group of women, children and a few men who could be spared from their farms without causing too much trouble. None of them looked like threats. Only Little John had the look of a man capable of thuggery, when he wasn’t hobbling around with his crutch. The Sheriff’s lack of imagination kept them all safe.
“Is everyone here?” it looked like everyone, but she couldn’t be sure.
“Marie and Rebeka are on watch.”
Marian nodded. “Be sure to fill them in.”