I’m going to be talking in depth about a character from the anime Yuri On Ice. If you haven’t seen it, I strongly recommend it. It is the cure for what ails most things in this world. You can watch for free (with ads) at CrunchyRoll 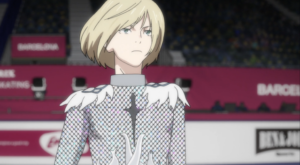 It would be easy to talk about Katsuki Yuuri’s character development, and plenty of others have. Viktor Nikiforov is also well discussed. They are the romantic leads, and it’s easy to think they’re all that the story is about. Then there’s Yuri Plisetsky (Yurio). He’s important enough to be in the opening credits and get his own scenes separate from the other two. He’s the one who has fascinated me in terms of character development.

Yurio is the youngest of the skaters we meet over the course of the season, just barely 16 by the end. At first blush, he’s a typically angry teenager. He’s entitled and demanding. Right from the start he attacks Katsuki Yuuri, telling him they don’t need two Yuuri’s in Grand Prix senior division. He sneaks off to Japan to demand Viktor return to Russia to be his coach. He spends much of his time growling and throwing tantrums as he watches Yuuri and Viktor together.

If I thought the writers of Yuri On Ice were lazy, I’d probably just leave it there. But they aren’t. They spent a lot of time on all the details of the story, and Yurio is no different.

Yurio isn’t a typical teen any way you look at it. He’s a figure skating prodigy, having won the Junior Grand Prix three years in a row by the time the series starts. Even with talent like that, he’s had to pour pretty much everything he has into skating. He lives apart from his family, or at least his grandfather. We never see him do anything other than skating. Even relaxing, he’s at the rink with other figure skaters. When he sneaks off to Japan, it’s his coach, Yakov, who calls and yells for him to come back, adding how important it is to work hard now for his senior debut. Viktor even asks what Yakov thinks of Yurio coming to Japan. 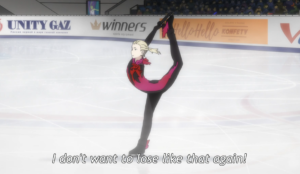 Yurio has a cushy, hard life, with little control. His skills in the rink have allowed him to rise to the top at the same time they’ve tied him to the ice. He probably hears from many younger skaters how lucky he is, when he’d really just like the chance to go visit his grandpa once in a while.

If you start digging you find that there’s even more to it. Grandpa is Yurio’s Agape – his unconditional love. The scene is touching, a memory from when Yurio was small. Grandpa is bringing him 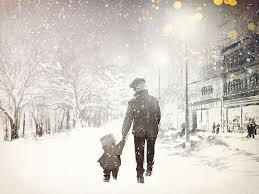 home from skating practice and praising little Yurio. There’s just one line that casts a shadow. Yurio’s mom isn’t there. It’s okay though, because Grandpa was there for him. Even as a little kid, Yurio was just looking for someone to love him.

Yakov, as a coach, is a loud and punitive task master. He yells at all of his skaters, Viktor and Yurio included. He drives Yurio to put his effort in, but is quick to anger and slow to praise. He’s a good coach in that he brings out the best in his skaters. Yurio is a champion under Yakov. However, he give Yurio only that anger as a roll model.

Viktor, however is a breath of fresh air. He encourages a young Yurio and leads him with a promise. A promise to choreograph a program for Yurio’s senior debut, if Yurio follows the rules and wins without including quad jumps in the junior division. Yurio holds that promise tight. It’s what he’s living for, right 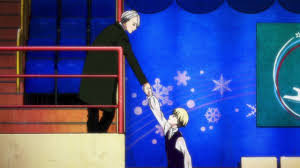 up until Viktor suddenly leaves to coach that other Yuuri. Talk about a betrayal.

Yet, even through all that anger, Yurio isn’t a bad person. When Yuuri asks to learn how to land a particular jump, Yurio teaches him. Even though they are in the middle of preparing for an exhibition that will determine which of them gets Viktor as coach. Later, when Viktor has to leave Yuuri in the middle of a competition, Yurio seeks out Yuuri and shares the special pirozkis Grandpa had made.

When we finally get to Barcelona for the Grand Prix Final, we also get to see how Yurio had a beneficial impact on Otabek – a skilled skater from Kazakhstan. Yurio made a strong impression on Otabek during a training camp years before. One that leads Otabek to offering friendship to Yurio when he turns down just about everyone else. Yurio, for his part, is at first confused then grateful for this offer. 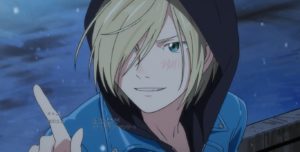 Yurio, it turns out, is a many layered character with an interesting arc. He gets over shadowed by the cute and loving relationship between Viktor and Yuuri, which is a shame. I hope we learn more about Yurio and see him grow as both a skater and a man in the next season.